Well, exciting news!!! The rerelease of Digging Up the Past is out!!!  It has a wonderful new cover, and a great publishing team, and I hope you all enjoy it.

Digging Up the Past is the first of a series called the Tales of Atlantis.  The premise for the series is that scavengers removed the stones from the Bimini Road, and Atlantis rose.  Preternaturals in Riley’s world call this the restoration, but the politically correct term among norms is the simply the return.

She knows her parents love her, family friends are polite, and she was even engaged once to the boy next door, but there are those that don’t bother to hide their disdain, dismissing her empathy and spell casting skills as less than.  This just made her push herself harder.  Her mother and grandmother taught her well, and she does have much of the shape shifter strength, eyesight, and sense of smell.

Since her fiancé was sent to jail for her brother’s murder, she’s honed her skills even further.  The fact that she’s a petite five feet, four inches hasn’t stopped her from training her body as well as her mind.  In college, she got her masters in photography in hopes of chronicling the development of the paranormal races since the restoration.  After Danal was killed, that changed.  She was so angry; she was using her talents to being down those she saw as the bad guys. That’s when she met Giles Walker.

Giles of the best agents the Department of Unusual Events (DUE) ever had.  He brought her into DUE and helped her learn to control the anger, and become an effective agent.  She and her half-demon partner, Jason, now worked to police the preternatural community, no easy task, since no human jail can hold them. 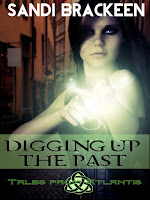 My cover on this assignment was that of a college student. I also worked as a dog walker for the Bradens, who were our primary suspects, so every afternoon, Angel, the Bradens’ German shepherd, and I made the two-block walk to the dog park near the Bradens’ house.

When I pulled in at the house, I could tell no one was home. The Bradens would be at the local dig site until at least dark, getting set for the summer dig, and it wasn’t unusual for Keesha, the Bradens’ daughter, and Mena, the operative from Cerberus Security who’s been acting as her nanny, to be out in the early afternoon. I clipped the leash on Angel and we headed for the park.

Oh, as for why they should be our primary suspects, that’s the easy part. John Braden was the American archaeologist on the Peruvian dig. His wife, Sonya, was the lead anthropologist on that same dig, and that put them at the top of the list of suspects. That placement was further supported by the fact that someone else believed they had the spade. Our file also indicated that things had been stolen from other dig sites when they were in charge. The hard part was that there was no evidence, solid or otherwise, that they took the spade, or that they were involved in any of the other thefts.
Posted by Pagan Realms at 4:30 PM