If nothing else, the one thing you can say about gay rights and the legalization of same sex marriage is that EVERYONE has an opinion.  My only issue with those who don’t feel same sex marriage should be legal is that making it illegal denies a group of people basic human rights based on a religious belief.  If we license marriage for some people, we must license it for all people.  What is legal for one person must be legal for others.  It’s that simple.  The Supreme Court had no choice but to declare that denying two people the right to marry based on gender issues is discriminatory.  That’s what they’re there for.
I’ve heard people say they’re overstepping their bounds, but those same people would have no problem if they’d allowed states to deny this basic right based on out of date laws that no longer reflect the beliefs of the country.  This is a legal matter, not a religious one.  Just because someone believes differently does not mean they shouldn’t have the same rights as everyone else.  That is the law in the land of equality.  All are created equal, and all are entitled to the same rights.  As long as we feel the need to license marriage, we must issue licenses to all.
On another note, Love is Love, and some of those who claim to follow the teachings of Jesus, would do well to review those teachings.  They focus on love and tolerance.
“When you think yours is the only true path you forever chain yourself to judging others and narrow the vision of God. The road to righteousness and arrogance is a parallel road that can intersect each other several times throughout a person's life. It’s often hard to recognize one road from another. What makes them different is the road to righteousness is paved with the love of humanity. The road to arrogance is paved with the love of self.”
― Shannon L. Alder
Many people talk about righteousness, but can only see it in others if it agrees with what they themselves believe.  How dare they think God is so petty?  Only man is shallow enough, and arrogant enough, to care who loves who.  Only man is small enough to deny basic human rights to an entire group of people because they believe differently.
One of my favorite sayings in all this is “Please tell me how someone’s gay marriage is going to violate the sanctity of your fourth marriage.”  If you’re looking at the Bible for your ideas, why is no one protesting divorce?
Personally, I have no vested interested in same sex marriage.  However, I have many friends who do, and you know what? Other than being able to be happy for them and celebrate their weddings, same sex marriage will have no effect on me, nor will it have any effect on anyone else who does not wish to have a same sex marriage.
Rant over.
Posted by Pagan Realms at 1:59 PM No comments:


I thought a little background on the Tales from Atlantis was in order since some of the books don’t focus that much on Atlantis itself.  They focus more on what would happen if magic returned, and for me, that's what happens when Atlantis returns.

Riley’s world came into being about 10 years ago when I heard about a contest where writers were asked to write stories based on what would happen if magic returned to the earth.

I didn’t write a story for the contest.  You have to overcome ‘life’ to make time to write, but the idea stuck with me.  Then it started growing until now it has developed into a whole world populated with characters who are sometimes a little different and don’t always follow the plan I have for them, but they wouldn’t be any fun if they did.  They do get the person, however, and I hope you’ll like them.

Riley’s work with DUE started after her brother was killed by her then fiancé in a drug deal gone bad.  That betrayal started Riley on a new life where she uses her empathic and witchcraft skills in spite of not being able to shift shapes like a proper shape shifter should.  Initially, anger drove her quest for revenge until she saw her lying killer of a boyfriend put away for life.  After that, she was just angry with all drug dealers until Giles Walker of DUE heard about the vigilante who was taking out drug dealers and brought her into DUE.  At the time of the events in this story, Riley has been with DUE for about 3 years.

I’ve always been fascinated with stories of Atlantis and magic, and I’m a big fan of Urban Fantasy like Jim Butcher’s Dresden Files, Laurell K. Hamilton’s Anita Blake, and Kim Harrison’s Rachel Morgan, so it was natural for me to write Urban Fantasy. 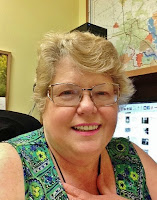 Author Bio:
Sandi lives in Texas with three roommates, two Yellow Labs, a Shepherd/Border Collie mix, two terrier mixes and assorted other critters.  The animals were primarily rescues.  Sandi’s full time job is as the Public Information Officer for the local Sheriff’s Office, and she teaches English part time at the local Community College.
She says she has a couple of degrees from the University of North Texas lying around somewhere, and she’s been writing ever since she can remember.  Sandi took time off for work and school, and previously her writing has been more geared toward short stories and academic papers.
Sandi publishes a newsletter and several articles a month in her current position, but she has now added writing fiction and currently has several more books in the works. 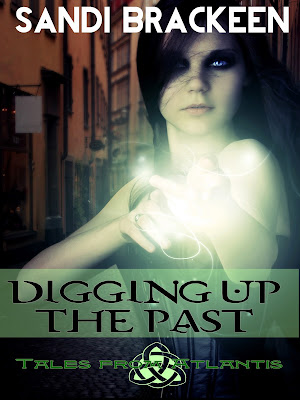 My cover on this assignment was that of a college student. I also worked as a dog walker for the Bradens, who were our primary suspects, so every afternoon, Angel, the Bradens’ German shepherd, and I made the two-block walk to the dog park near the Bradens’ house.
When I pulled in at the house, I could tell no one was home. The Bradens would be at the local dig site until at least dark, getting set for the summer dig, and it wasn’t unusual for Keesha, the Bradens’ daughter, and Mena, the operative from Cerberus Security who’s been acting as her nanny, to be out in the early afternoon. I clipped the leash on Angel and we headed for the park.
Oh, as for why they should be our primary suspects, that’s the easy part. John Braden was the American archaeologist on the Peruvian dig. His wife, Sonya, was the lead anthropologist on that same dig, and that put them at the top of the list of suspects. That placement was further supported by the fact that someone else believed they had the spade. Our file also indicated that things had been stolen from other dig sites when they were in charge. The hard part was that there was no evidence, solid or otherwise, that they took the spade, or that they were involved in any of the other thefts.

Posted by Pagan Realms at 10:17 AM No comments: