The Story of Sadie Sue Shagbottom 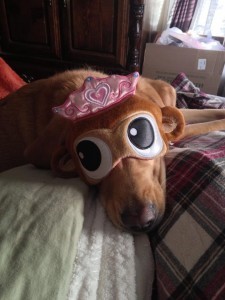 The summer of 2010, I had been in a new apartment for a few months and that old need was gnawing at me.

If you want unquestioned faith, loyalty and love—get a dog. What they don’t tell you is that the kind of dog matters. A bad patch of life had had a hold of me since about 1999. I moved out of my parents for the first time, because there was no way they would let me adopt or purchase a dog, but I was depressed and I needed a reason to get up in the morning. No pets. They weren’t hearing me, and what I was attempting to express and I felt that they didn’t care to try. So I left that house behind and followed my heart.

By December, I had worked with a breeder to bring home my little Maximillian. He was an all white (except for the brown/black spot on the base of his tail and two tiny freckles on his pendant ear) Jack Russell Terrier. I come from a family that has always had a dog, and dogs have always been able to make me feel better no matter the circumstances of my pains. Their love is unlike anything else. Sure, I could have gone out and tried dating. It probably would have led to less problems than I had with Max. We were oil and water. Who thinks a dog is going to make you feel like that? Yet, he was charming and ridiculously silly. He just wasn’t a snuggle bug and the messes were destroying the house. Potty outside was viewed as pure torture. He was such a contradiction!

Once night, he flailed out of my arms and fell to the floor in a heap. I panicked and off to the vet we went. Thankfully he was okay. Mostly. The vet who responded explained the trouble with Max. He had a condition: cerebral hypoplasia. While Max wasn’t providing the fix I was after, I had brought him into my life and me into his. Responsibility meant that I stick this through. He was spoiled and loved, with tense worry that his condition (hallmarked by a tremor in the back legs) might worsen. In return, he was ungrateful and rude, and soiled in the house.  He was lucky to be such a handsome, silly boy. 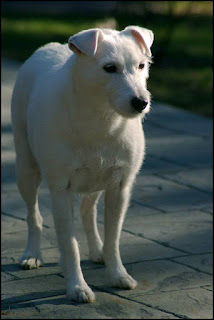 To help me through the rejection, I adopted a cat. My roommate adopted his sister. A year later, as I was just beginning to heal thanks to the love of that rescue cat, Shen Fu the talking wonder Siamese—I met with financial hardship and had to return home. The conditions were that I could not bring home my cat, but I could keep the dog. There was no choice. In the end, Shen Fu was able to stay connected with my roommate, who he shared the town house with, and, more importantly, stay with his sister.

Fast forward one dark night, and as I sat on the phone consoling my friend, I choked back the misery of having lost the love of my life only a year after finding him and now I was losing him for good. Shen was dying. My friend grieved horribly. His sister passed just 30 days later. I still carry that loss heavy on my heart. He was a gorgeous and loving animal who had helped to heal my heart.

Ever at my side, even if indignantly, his majesty the Emperor Maximillian thrived. My mother spoiled him. They would garden all day while I was at work. I would come home and be greeted with a typical Jack Russell greeting: Lots of jumping spinning and zoomies. Sometimes, I saw the love and that helped. The rejections still came. He bit my mother and soiled the house. The condition, had not progressed, though. He was doing great.

Come to find out, the family vet now taking care of my boy clarified his condition. They had to muzzle him, you see, and I was at a loss to figure out why he was so snappy and moody. I’ve been told that is just Jack behavior, but my gut said something else.

You see, cerebral hypoplasia makes it difficult to do anything like a normal dog. It makes training nearly impossible, and the animal suffers tremors for life. Most die as infants, some can go on to live long lives, should they not degrade neurologically. His reactions were coming from his disability. She sad that was no excuse for bad behavior.

All I felt was relief. I could better respect and understand why he was the way he was. Realizing that my boy had special needs cleared up a lot and it helped me to grow. I was now angry with the breeder for doing this to him, me and my family. I held Max even closer—so long as he wasn’t biting. 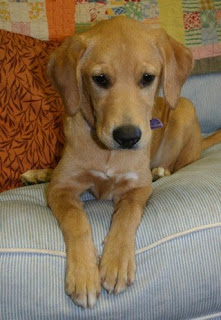 In 2010, that old familiar puppy-itis returned. I wanted another pet. I had thrived with the cat to offset Max and I felt that he needed a companion during the day to stave off the loneliness while I was at work. Researching Corgi and Great Dane Breeders, I didn’t find any in my neck of the woods, but these were the breeds I was interested in. A coworker told me to adopt. I looked into adoption. MAGDRL doesn’t allow adoption of puppies to apartment dwellers, and I had my JRT to consider. Corgi rescue was harder to figure out and there seemed to be few available. Again, I needed a puppy and a passive female that would accept Max’s dominance. The slog went on, until the coworker returned to my desk and demanded that I go to the rescue site she used to get her dog.

Scrolling through the faces, my heart ached. Can’t I help them all? Then, the face of an angel appeared. A teardrop on her forehead and ginger fur…dark soulful eyes and she was a puppy…only 5-6 months. Her name was Sadie. She came from a bad situation in Kentucky, where her family neglected her. The dog warden, sensing her sweet nature, said that he couldn’t leave her there and called the rescue. Then, Sadie was whisked off to foster care, where she was brought up to potty training speed and socialized. A few short weeks later, she was on a bus to me.

I hardly believed it the moment she came off the bus. Here she was. The whole transaction was surreal and easy and meant to be. I got her home and she bowled through max in eager play. He was ecstatic. I was ecstatic. 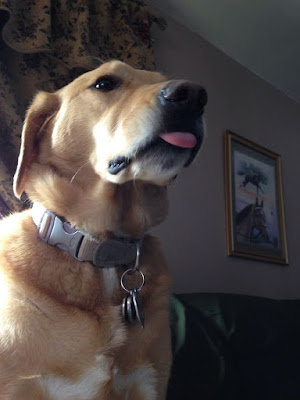 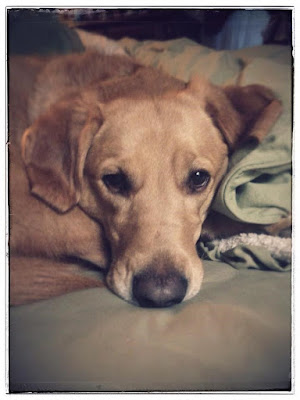 Years passed and Sadie became Miss Shagbottom, a name given her for the shaggy fur on the backs of her legs. We’ve enjoyed high times. Christmas, birthdays, Easter, Halloween…any day is treat day. She and Max must have bonded in the middle of that, in a way I didn’t notice. When he took sick with lymphoma, she became withdrawn. When I took him to the doctor for the last time, she grew sad and those soulful eyes darkened up a bit. To this day, she reflects that mourning. He is with us though, in a lovely engraved blue urn that sits in the living room, next to his bear.

Miss Shagbottom is now the star of her own series called Shagbottom theater. Thanks to an app on the smartphone, I can take stills, record words and make some hysterical videos. I share these now and then, and the sassy character she’s come to be known for is loved by all who stumble upon these nuggets. The last piece, she called me old and then begged for money for St. Jude’s. She has no shame. And, don’t ask about the antler incident. She’s still sensitive about it. 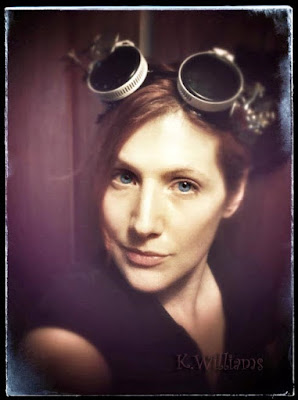 Born in Saratoga Springs, New York,  K.Williams embarked on a now twenty year career in writing. After a childhood, which consisted of voracious reading and hours of film watching, it was a natural progression to study and produce art.
K attended Morrisville State College, majoring in the Biological Sciences, and then continued with English and Historical studies at the University at Albany, home of the New York State Writer’s Institute, gaining her Bachelor’s Degree. While attending UA, K interned with the 13th Moon Feminist Literary Magazine, bridging her interests in social movements and art. Topics of K’s writing include the environment, animal welfare, gender limitations, racial disparities, and the trauma of war.
Published novels by K include the Civil War drama Blue Honor, the Second World War spy thriller OP-DEC:Operation Deceit, and the controversial science fiction/fantasy series The Trailokya Trilogy. In addition to writing novels, K enjoy’s the art of screenwriting and has worked on the screen spec 8 Days in Ireland, and the adaptations of her current novels. Currently, K has completed the Master of Arts in Liberal Studies program for Film Studies and Screenwriting at Empire State College (SUNY), and is the 2013-2014 recipient of the Foner Fellowship in Arts and Social Justice. In 2015, K. Williams became an official member of International Thriller Writers.
K continues to write on this blog weekly, producing commentary Mondays and Fridays on hot topics with some fun diversions for your work week. Whether it’s cooking, learning a foreign language, history or dogs, you’ll find something to enjoy and keep coming back for.  Always a promoter of other artists, K uses Guest Blog Wednesdays to showcase artists from around the web and bring you interesting readings to expand your horizons. A sequel to her second novel, OP-DEC, is in the research phase, while the screen adaptation is being considered for production by film companies.
A devoted dog mom to Miss Sadie Sue Shagbottom, K is also a visual artist, producing the ZoDuck Cartoon, painting and sketching–digitally or traditionally, as well as an accomplished Photographer. 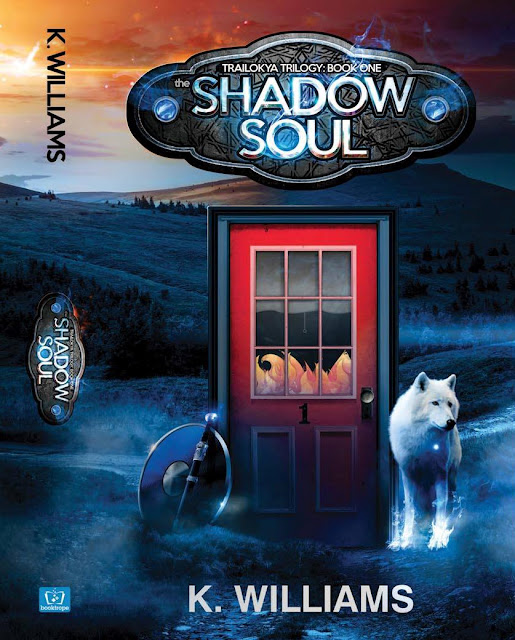